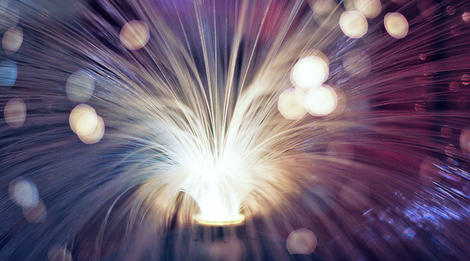 Verizon has announced that it has successfully completed testing fiber optics broadband tech can reach internet download speeds of up to 10Gbps, with the aim of being able to support 4K video streaming in the future.

The faster internet tech, named next-generation passive optical network or NG-PON2, has been tested on its current fiber-to-the-premise network.

The technology uses a new optical line terminal which has been installed in Verizon’s central office, which creates four wavelengths of colors, and each wavelength is able to support speeds up to 10Gbps down and 2.5Gbps up.

During the tests, Verizon was also able to transmit both the current signal as well as this new NG-PON2 at the same time, with the company saying it could potentially switch between the signals if needed.

The carrier also noted that its new platform could potentially grow to support internet speeds of up to 40 to 80 Gbps.

«Deploying this exciting new technology sets a new standard for the broadband industry and further validates our strategic choice of fiber-to-the-premises,» said Lee Hicks, VP of network technology for Verizon.

Verizon’s current network will need to be upgraded with the relevant hardware and software before the new fiber optic platform can be rolled out.

It will be issuing a request for proposals later this year for the purchase of the hardware and software, and expects interest in the platform with the adoption on 4K video content.